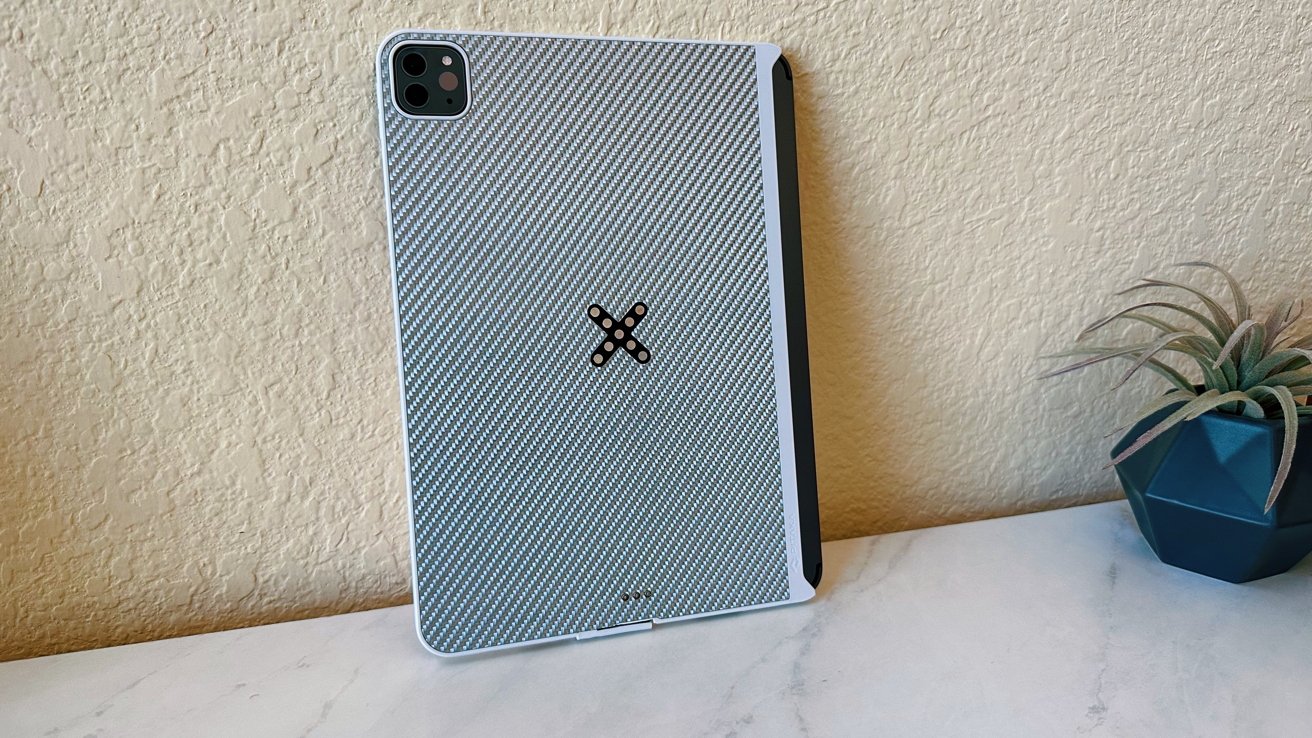 Wireless charging for the iPad Pro is finally here – assuming you want to spend $200 or more on the Pitaka MagEZ Case Pro ecosystem.

There are several products in Pitaka’s MagEZ line, but they all revolve around the MagEZ Case Pro. So that’s where we’re going to start.

The Pitaka MagEZ Pro case is more of a shell than a full case and wraps around the back of a latest generation iPad Pro. A USB-C adapter attached to the Pro case plugs into the iPad port to then route the magnetic charging connection from the back of the case to the port.

It’s a smart solution to give the iPad Pro wireless charging capabilities. The left side of the iPad is unprotected so that it can work with the Magic Keyboard for iPad.

The MagEZ Pro case is slim enough to fit inside Apple’s Magic Keyboard case for iPad and also includes the necessary three connection points for data and power to pass through.

We had no problem fitting our 11-inch iPad Pro into a Magic Keyboard for iPad and closing it. Pitaka’s case almost disappeared when used with Apple’s keyboard case.

The USB-C adapter portion of Pitaka’s Pro case can even be folded away in case you need to plug a different cable into the iPad.

We liked the smooth back of Pitaka’s case covered in aromatic polyamide (aramid fiber). It was nice to hold while using the iPad on the couch.

The biggest concern isn’t the case itself, but its $99 price tag. The case’s wireless power advantage requires spending even more on a compatible mount or charger.

If you like the idea of ​​a slim protective case that can be used with the Magic Keyboard (and don’t need the power part), Pitaka makes the MagEZ Case 2 which is slightly cheaper.

Note: We used a prototype model of the new case with an 11-inch iPad Pro, but had no issues with its fit or performance.

The MagEZ charging stand delivers both power and productivity. We saw the stand deliver around 20W of power to our docked iPad and 15W from the base’s Qi charger when a Google Pixel 7 was on it at the same time.

The stand can rotate an iPad 360 degrees from landscape to portrait. It can also tilt 32.5 degrees up and down.

We wished the vertical arm could be adjusted up or down for more versatility, but the 9.7-inch height still worked well for typing on the iPad and watching movies.

The magnetic force of MagEZ charging stand and MagEZ Pro case was strong. We had no concerns about the iPad slipping or falling if it were to be bumped.

Comfort, at what price?

Using a case on your iPad usually means sacrificing a bit of convenience. Only using the Magic Keyboard for iPad is heavy and cumbersome. Other iPad cases can be difficult to take off and put back on.

Pitaka’s MagEZ Pro case is a rare case where an iPad can still stay (mostly) covered and still get the benefits of Apple accessories. It worked well and was nice to hold.

Its main problem, however, is its value. It’s expensive to spend $99 for the Pro case and then $129 for the charging stand. Other accessories will further increase this bill.

There are plenty of iPad stands we like for less money. But the added functionality provided by Pitaka’s case and stand is certainly handy if you’re willing to splurge.

Ultimately, we don’t think you’ll be disappointed if you want what Pitaka offers. But, it’s not perfect.

The MagEZ Pro Case for iPad Pro is available for purchase from Pitaka’s online store for $99.99. It’s also available as a bundle with the MagEZ charging stand, for $228.99.